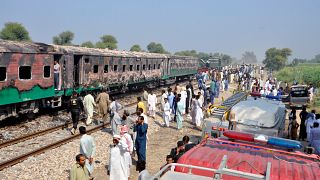 Rescue workers and investigators sifted through charred wreckage for survivors after a cooking gas stove erupted in flames on a train in Pakistan's eastern Punjab province, killing at least 65 passengers.

Flames roared through the cars as the train approached the town of Liaquatpur in Punjab, the latest tragedy to hit Pakistan's dilapidated, poorly maintained and mismanaged rail system.

The death toll had risen steadily since the early morning. The fire broke out when a gas stove exploded as breakfast was being prepared on board.

Poor passengers often bring their own small gas stoves on the trains to cook their meals, despite rules to the contrary, according to Railways Minister Sheikh Rashid Ahmed. Safety regulations are often ignored in the overcrowded trains.

Train accidents in Pakistan are often the result of poor railway infrastructure and official negligence.

Pakistan's colonial-era railway network has fallen into disrepair in recent decades due to chronic under-investment and poor maintenance.

Eleven people were killed in an accident in July and four in another accident in September.

About 130 people were killed in 2005 when a train rammed into another at a station in Sindh province, and a third train hit the wreckage.