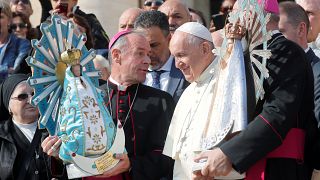 During the handover in St. Peter's Square at the end of his weekly general audience, Francis also blessed and kissed a gravestone for the tomb of an unknown Argentine soldier.

Argentine soldiers took the statue of Our Lady of Lujan, one of their country's most revered icons, with them for divine protection when they invaded the islands, which Buenos Aires calls the Malvinas, on April 2, 1982.

That statue was a copy of 1630 original, which is in the cathedral of Lujan.

After the Argentine rout at the end of a two-month conflict, a Catholic Church official responsible for the Falklands gave it to the Catholic military chaplain who had arrived with the British forces.

The statue was then taken to Britain and found a home in the Catholic Military Cathedral of St. Michael and St. George in Aldershot, in southern England.

The statue that was in Britain will return to Argentina and a replica will go to the British cathedral in Aldershot.

Olivera had asked for it's return because people in the area of Argentina where it was venerated before the war wanted to be able to pray before it again.

Some 255 British troops and about 650 Argentine soldiers were killed in the two-month conflict.

Argentina still claims the windswept South Atlantic archipelago, which has a population of about 4,000.