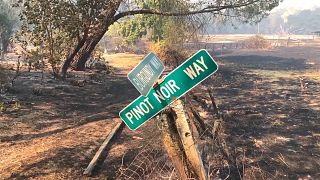 Firefighters in northern California are attacking a massive wildfire burning in Sonoma County's wine country ahead of another major wind event forecast for Tuesday night.

California's biggest utility, Pacific Gas & Electric, cut off power to an estimated 2.5 million people in the northern part of the state over the weekend in yet another round of blackouts aimed at preventing windblown electrical equipment from sparking more fires. And more shut-offs are possible in the next few days.

Nearly 200,000 people were under evacuation orders, mostly from the city of Santa Rosa.

Gov. Gavin Newsom declared a state of emergency over the weekend.

The biggest evacuation was in Sonoma County, where some people who were packing up and fleeing Sunday had done so two years ago, when devastating wildfires swept through Sonoma, Napa and neighbouring counties, killing 44 people.

Hundreds of people arrived at the Sonoma County Fairgrounds in Santa Rosa by Sunday. Some came from nursing homes.

More than 300 people slept in an auditorium filled with cots and wheeled beds. Scores of others stayed in a separate building with their pets.

A historic attraction outside Healdsburg was lost Sunday when embers carried by wind sparked a blaze that engulfed the Soda Rock Winery. The buildings included a general store and post office founded in 1869.