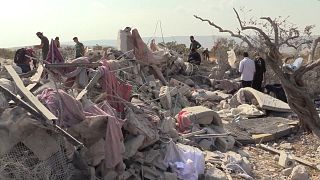 Video emerged purporting to show the location of Islamic State leader Abu Bakr al-Baghdadi's home in Barisha, in Syria's northwestern Idlib province, reduced to a mound of bricks and rubble following the raid.

US President Donald Trump confirmed on Sunday that the reclusive leader of the terrorist group was killed overnight.

Trump said al-Baghdadi fled into a tunnel with three children as US forces pursued him. There, he detonated a suicide vest.

No US forces were killed or injured in the raid, Trump said.

He added that al-Baghdadi's identity was positively confirmed by a DNA test conducted onsite.