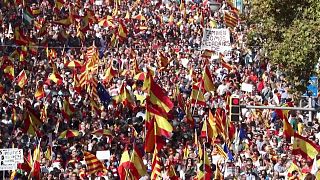 Tens of thousands protest against Catalan separatism in Barcelona

Tens of thousands of Spanish unity supporters filled the streets of Barcelona, just one day after pro-independence protests turned violent.

Protesters held signs saying they were sick of the separatist movement and waved Spanish flags.

About 80,000 people demonstrated, according to Barcelona's urban police, whereas local police said that 350,000 attended a pro-independence rally on Saturday.

Some 500,000 protested earlier in the month and roughly 600,000 people attended a march on Catalonia's national day last month which has been marked by pro-secessionist demonstrations since 2012.

But the region has a population of about 7.5 million and its electorate is almost evenly split over the issue of independence.

Barcelona has witnessed daily protests since Spain's Supreme Court sentenced nine politicians and activists to up to 13 years in jail for their role in the failed independence referendum of 2017.