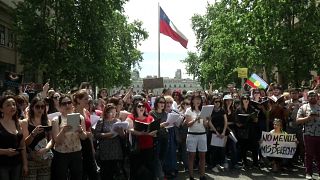 Choral singers call for peace and unity amid Chile unrest

As sometimes violent protests continue to rock Chile's capital, a group of choral singers gathered to raise their voices in unity and call for peace.

The singers gathered not far from Chile's presidential palace, La Moneda, to raise their voices in unison for a peaceful protest.

According to local media, some 200 singers participated and sang songs by legendary Chilean singer-songwriter Victor Jarra, who was tortured and killed during the dictatorship of Augusto Pinochet.

Recent protests in Chile started over a hike in public transport fares and boiled over into riots, arson and looting that have killed at least 17 people, injured hundreds, brought more than 7,000 arrests and caused more than $1.4 billion of losses to Chilean businesses.