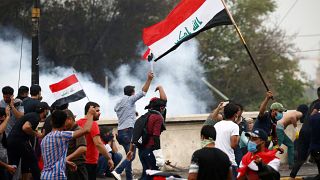 Iraqi security forces used tear gas and stun grenades to repel demonstrators on Friday morning (October 25) who had marched towards government buildings in protest against corruption and economic hardship.

The incident marked a renewal of the anti-government protests after security forces killed about 150 people in confronting a round of demonstrations at the start of the month.

About 1,000 people, some of whom had camped overnight in Baghdad's Tahrir Square, were marching towards the city's fortified Green Zone, which houses government buildings and foreign embassies when they were stopped by security forces.

Prime Minister Adel Abdul Mahdi said in an address on Thursday (October 24) that people would be free to exercise their right to demonstrate but that violence would not be tolerated.

Demonstrators blame corrupt officials and political elites for failing to improve their lives.