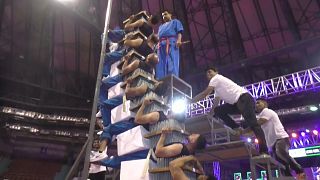 Nailed it! Bed of nails record broken in India

A group of martial arts experts broke the Guinness World Record for the number of people lying on a multi-layered bed of nails on October 23.

A nine-member team led by martial arts expert, Vispi Kharadi, lay on top of each other with four-to-six inches on nails placed between them as an audience watched on.

Kharadi and his team broke the record which their own team set only last year with eight people.

In addition to being at the bottom of the bed of nail sandwich, Kharadi set the record for bending the most iron bars using his neck in a minute, bending 21 bars to 90-degree angles.