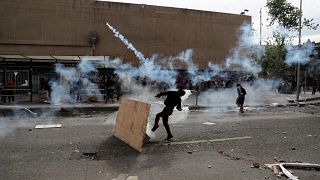 It was the latest in a wave of protest that's shaken Chile and shows no sign of slowing, despite promises of economic reforms from President Sebastián Piñera.

Trade unionists in the world's top copper-producing country joined the demonstrators in a general strike.

Millions of students were unable to attend classes, several subway stations were shut, and long lines continued to form outside gas stations and supermarkets after many were torched or destroyed.

It expanded into protests against inequality and to demand improvements in education, healthcare and wages in one of Latin America's wealthiest but most unequal nations.

Most of the protests have been peaceful with demonstrators of all ages banging pots to demand reforms.

But the unrest also involved riots, arson and looting that have wracked Chile for six days, nearly paralysing a country long seen as an oasis of stability.

About 20,000 soldiers are patrolling the streets, nearly 200 people have injured and some 5,000 have been arrested. 18 people have died as a result of the riots.