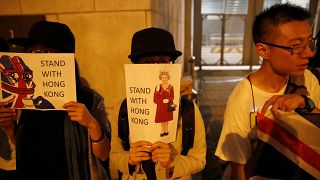 Hundreds of pro-democracy protesters formed a human chain around the British Consulate in Hong Kong on Wednesday night.

Hong Kong’s legislature on Wednesday formally withdrew planned legislation that would have allowed extraditions to mainland China, but the move was unlikely to end months of unrest as it met just one of five demands of pro-democracy demonstrators.

The rallying cry of the protesters, who have trashed public buildings in the Chinese-ruled city, set street fires and pelted police with petrol bombs, has been “five demands, not one less,” meaning the withdrawal of the bill makes no difference.

Hundreds of protesters gathered peacefully outside the British Consulate, waving British flags, chanting “stand with Hong Kong” and calling for support for a British parliamentary debate on the citizenship status of Hong Kong people scheduled for Thursday.

Hong Kong leader Carrie Lam had said many times the extradition bill was as good as dead and that other demands, including universal suffrage and an amnesty for all those charged with rioting was beyond her control.

Protesters are also calling for her to stand down and for an independent inquiry into perceived police brutality during a long hot summer of running battles on the streets.