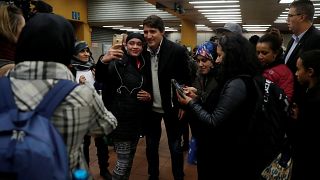 Trudeau, who won a second term in Canada's national elections, delivered an unexpectedly strong result despite a series of scandals that tarnished his image as a liberal icon.

Trudeau's liberal image took a blow early in the campaign when photos emerged of him wearing blackface in the early 1990s and in 2001.

His Liberal Party took the most seats in Parliament. However, Trudeau fell short of a majority, so the Liberals would have to rely on an opposition party to pass legislation.