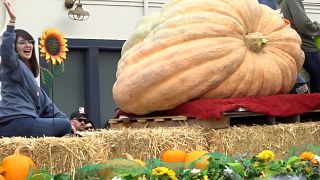 The festival features a pumpkin parade with a marching band, floats, people in costume and classic cars.

The big event, however, is a real pumpkin weigh-off competition. This year's winner, a Napa, California hobbyist took home $15,000 (13,450 euros) and boasting rights for the heaviest gourd that weighed 2,175 pounds (986 kilograms.) It's set a record for the largest in the state.

The man says he took up the pumpkin-growing hobby in 2000 for fun and enjoys the pumpkin growing community. He also won the contest in 2011.

He always tells his pumpkins he's proud of them and encourages them to keep growing.

And that's not the only giant pumpkin to see at the festival.

Half Moon Bay’s annual Art and Pumpkin Festival brought out nearly 100,000 visitors to Main Street and a lot of the attention was on one little stage.