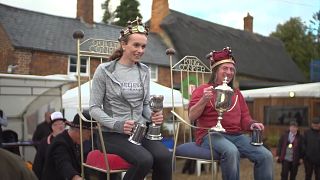 The delay was caused by the torrential downpours on Sunday morning, which led to the flooding of the playing area and prompted organisers to set up raised platforms for contestants to compete on.

The championships were started by fishermen in 1965 who held a conker contest after bad weather at sea prevented them from fishing.

Conkers is played by two players, who take three alternate turns to swing their conker, that is attached by a piece of string, with the aim of smashing the other contestant's conker.

"If the conker that you've got is harder than the other guy's you've won," said 87 year old Chelsea Pensioner John Riley, a former champion.

OTHER SPORTS AUTUMN ENGLAND
Now playing Next
no comment