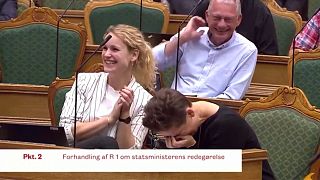 Danish PM gets the giggles during statement on circus elephants

Denmark's Prime Minister Mette Frederiksen roared with laughter when giving a speech during the parliament session on October 3.

Frederiksen started to laugh as she was telling a story of four circus elephants bought by the Danish government in September to provide them with a decent retirement.

Ramboline, Lara, Djunga and Jenny, are the last circus elephants in the country and Food and Fisheries Ministry said it accepted applications for a retirement home for the animals.

The Danish government will discuss a new bill to ban all wild animals from circuses later this year.