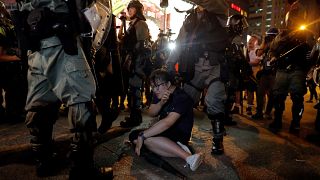 Police clear out protest with tear gas in Hong Kong

Hong Kong police fired tear gas as hundreds of protesters gathered outside Prince Edward metro station in the Mongkok district of the city as demonstrations against perceived political encroachment from Beijing continues.

Hundreds of protesters gathered in Hong Kong shopping malls during the day to demand"freedom" but the large street protests expected failed to materialize as the city struggled to recover from violent clashes in recent days.

Riot police cleared the streets of central Hong Kong of black-clad protesters and makeshift barriers following another night of rage on Monday.

Earlier in the day, two protesters were charged with violating Hong Kong's new ban on wearing masks at rallies, a move likely to add to a backlash that has thrown the semi-autonomous Chinese territory into deeper crisis.

The protests were sparked by a now-shelved bill that would have allowed some criminal suspects to be sent to mainland China for trial but have since morphed into a larger anti-government movement.

Protesters are upset at what they say is Beijing's increasing influence over the former British colony, which was promised a high level of autonomy when it returned to Chinese rule in 1997.

In a statement on Monday, police said the "public order of the whole city is being pushed to the verge of a very dangerous situation."