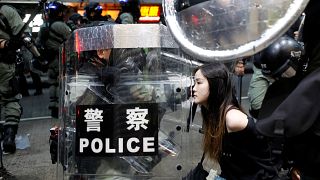 Protesters marched in Hong Kong on Sunday in two major demonstrations, one on the island and another on the Kowloon peninsula.

Protesters marched in Hong Kong on Sunday in two major demonstrations, one on the island and another on the Kowloon peninsula.

Violent protests had erupted across the Asian financial centre soon after Lam wielded the colonial-era powers for the first time in more than 50 years to order the ban in hopes of curbing months of unrest.

Protesters clashed with anti-riot police forces in central Hong Kong on Sunday, as a court rejected a second attempt to block a ban on masks aimed at quashing violence at pro-democracy rallies.

Several protesters were detained after police fired tear gas in several areas amid confrontations between officers and protesters that have become a regular occurrence during the 4-month-old protest movement.

The ban took effect on Saturday, triggering more clashes and destruction over the last two days in the semi-autonomous Chinese territory.

A teen protester was shot on Friday night in the thigh after an off-duty police officer fired his pistol in self-defence.