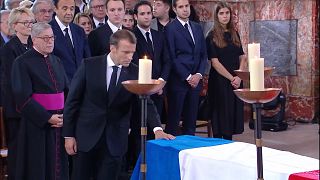 Former French President Jacques Chirac, who dies at the age of 86, was honoured with a national day of mourning, military honours, and funeral service in Paris.

Activists from Reporters Without Borders (RSF) dropped dismembered mannequins outside the Saudi Arabian consulate in France to mark one year since the killing of journalist Jamal Khashoggi by agents of the Saudi government. His body has never been found.

A Los Angeles police officer was captivated by the soprano voice of a 52-year-old homeless woman in a subway station. After the video of her singing went viral, she was identified by my local media as Emily Zamourka, who came to the United States from Russia at the age of 24. She said she was homeless due to illness and used to play a violin until it was stolen three years ago.

Climate change activists used a fire engine to spray red paint at the facade of Britain's finance ministry on Thursday (October 3) in an attempt to draw attention to what they said was the government's failure to avert a climate emergency. However, they briefly lost control of the hose.

Azores residents are counting the cost of damage caused by Hurricane Lorenzo. In the archipelago of nine islands, central Faial was one of the worst affected as high winds and massive waves destroyed seaside houses.