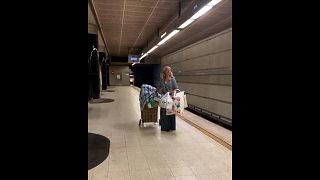 The video was posted on Twitter by the Los Angeles Police Department. The post said, "4 million people call LA home. 4 million stories. 4 million voices…sometimes you just have to stop and listen to one, to hear something beautiful."

At the time, the woman was unidentified, but Los Angeles TV station KABC found her. She is Emily Zamourka, who came to the United States from Russia at the age of 24.

She told the television station that she was homeless due to several health setbacks and used to play a violin in the streets of Los Angeles until it was stolen three years ago.

She said she sings in the subway because of the way it sounds there.

Zamourka said she dreams of being able to work in music again.