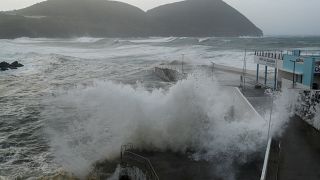 In the archipelago of nine islands, central Faial is one of the worst affected as high winds and massive waves destroyed seaside houses.

Hurricanes the size of Lorenzo are rare so far north and east in the Atlantic basin.

Lorenzo is producing huge swells across the North Atlantic as it moves northeast toward Ireland the United Kingdom and weakens to Category 1.

The US National Hurricane Centre in Miami said swells generated by Lorenzo are being felt the east coast of the United States and Canada, the Bahamas and parts of western Europe.

The swells are bringing life-threatening surf and rip currents, it warned.

The National Hurricane Centre said Lorenzo is "likely be a fairly vigorous cyclone" when it reaches Ireland late Thursday.

The U.K. Met Office forecast "very strong winds and heavy rain" for western areas of the country on Thursday and Friday.

The Portuguese weather agency reported gusts of up to 145 kph (90 mph) in the Azores - lower than forecast as Lorenzo lost power over cooler water.

Around 250,000 people live on the nine volcanic islands.

Authorities in the archipelago placed seven islands on red alert as Lorenzo approached.

School classes were cancelled and government offices were closed as people were told to remain indoors on Wednesday.

Azores airline SATA cancelled all flights to the archipelago, and some islands closed their ports.