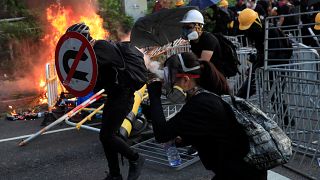 Hong Kong police break up protests in day of violence

Police and protesters clashed in Yau Ma Tei on Tuesday as widespread violence broke out throughout Hong Kong.

Tens of thousands of people joined anti-government demonstrations that spread across the semi-autonomous Chinese territory, as Communist leaders in Beijing celebrated 70 years in power.

In an escalation of violence, Hong Kong police shot a protester at close range in the chest, leaving the teenager bleeding and screaming on the ground.

Police said the single pistol shot fired by the officer, as protesters swarmed toward him, hit the 18-year-old on the left side of his chest.

Hong Kong's hospital authority said the teenager was one of two people in critical condition, with a total of 51 people injured in fierce clashes between protesters and police.

While officers have previously fired warning shots in the air on multiple occasions during months of demonstrations in Hong Kong, this was the first time a protester is known to have been shot.

Meanwhile, China celebrated its growing power and confidence with a huge display of military hardware and goose-stepping troops in Beijing on Tuesday, overseen by President Xi Jinping who pledged peaceful development on Communist China's 70th birthday.

The event is the country's most important of the year as it looks to project its assurance in the face of mounting challenges, including nearly four months of anti-government protests in Hong Kong and an economy-sapping trade war with the United States.

The former British colony was in lockdown on Tuesday with barricades in the city centre, shuttered stores and a heavy police presence. Embattled Hong Kong leader Carrie Lam is in Beijing for the anniversary celebrations.