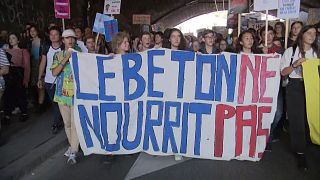 Climate protesters including students, citizens and activist's groups took to the streets of Lausanne in Switzerland chanting and held up signs including "Dora cannot explore the Amazon rainforest, it is on fire" or "our planet is in danger, we have to save it".

Police said 3,500 took part in the main march, while between 200 and 400 joined unauthorised action by the activist group "Extinction Rebellion" and blocked a road located at the entrance of Lausanne.

The latest round of protests, which built on last week's marches by millions of children around the world, were planned to roll through Asia and Europe before culminating in a rally in Montreal, Canada, where teenage activist Greta Thunberg is scheduled to speak.