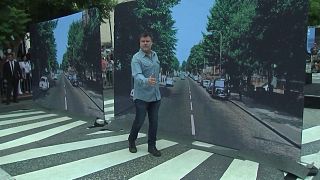 Hollywood celebrated the 50th anniversary of The Beatles' Abbey Road album on Thursday with a temporary zebra crossing and a speech from longtime fan and friend, actor Sir Patrick Stewart.

Stewart unveiled a sign dedicated to the album at the event and told a story about driving the Aston Martin of Beatles member Paul McCartney when he was a 24.

"We drove from Bristol to Bath and back. And all the way Paul kept saying, 'come on put your foot down overtake, overtake.' And all I could think was if I killed Paul McCartney..." he said.

For Sir Stewart, being able to call Paul and Ringo's friends is still surreal.

"I saw Paul and Ringo about six weeks ago, just by accident, by chance in a restaurant. And it is always whenever I meet Paul as though no time has passed at all. He has an immediacy of behaviour, a spontaneous way of behaving which is remarkable," he added.

During the event, fans were able to recreate their own Abbey Road Album cover and snagged exclusive Beatles commemorative giveaways.

The Abbey Road album was released on September 26, 1969, and was the last one the group recorded together as a band.

A special anniversary edition of the album has been released with new mixes and unreleased session recordings and demos.