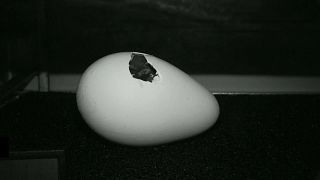 Born in a zoo in the Belgian city of Antwerp last weekend, 'Urban' - an Emperor penguin - is an extremely long way from home.

Emperor penguins, native to Antarctica and the only species of penguin to give birth in the frozen winter months, are classed as 'near threatened', with only 60,000 remaning in the world.

Urban is the first male chick to be born since his mother, Ra, three years ago. His father, Eddy, is also a resident of the zoo. .

Although Urban was able to peck a significant hole in his egg's shell, he was helped out by zoo staff and placed in an incubator to dry off and rest after the exertion.

Emperor penguin chicks take up to 62 days to hatch and Urban spent much of this time in an artificial incubator where zoologists were able to monitor variables like air humidity and temperature.

According to the World Wildlife Fund (WWF), Emperor - the tallest and largest of all penguins - play an important role in the Antarctic ecosystems, regulating squid and small fish populations and constituting a source of food for larger predators such as leopard seals and sharks.