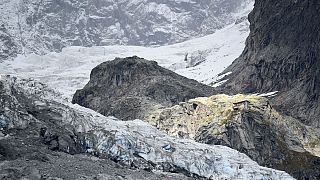 Italian authorities in the northwest region of Courmayeur, Aosta closed roads and evacuated mountain huts on Wednesday (September 25) after experts warned that part of a glacier on Mont Blanc could collapse.

According to officials, about 250,000 cubic metres of ice threatens to come down in the form of ice avalanches from the Planpincieux glacier along the Italian side of the Mont Blanc massif, after technical structures of the Safe Mountain Foundation registered an acceleration in the displacement rate of the glacier that has reached a speed of 50-60 centimetres per day.

The Mayor of Courmayeur, the nearest town and a major ski resort, decided to close roads in the Val Ferret on the Italian side of Mont Blanc and mountain huts in the Rochefort area were evacuated as a precaution.

According to local authorities, there was no threat to residential areas or tourist facilities but residents have been informed of the possible scenarios in case of collapse.

The rise of global temperatures due to global warming is causing mountain glaciers to melt and the retreat of polar ice sheets.