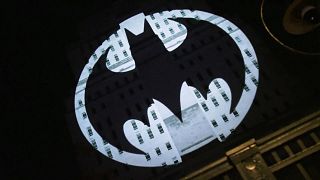 The 'Bat-Signal' shines around the world as Batman turns 80

The 'Bat-Signal' beamed out across the globe at 8 p.m. local time on Saturday evening to mark Batman turning 80.

The sign of The Dark Knight, a character created by DC Comics, was first projected at Fed Square in Melbourne, Australia to celebrate the start of Batman Day.

Fans dressed for the occasion that marks the 80th anniversary of the Caped Crusader's first appearance in the pages of DC Comics back in 1939.

The global event also saw Batman 5K night runs and talent signings as part of the festivities in some cities.