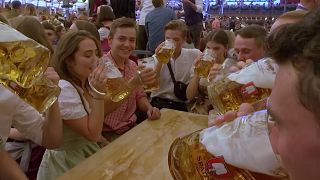 Munich's famous beer halls rang out with cries of "O zapft is!" as the first keg was tapped and the city's 186th Oktoberfest got underway Saturday.

Germany's world famous beer festival was so crowded that security guards jad to restrict access to one of the beer tents to people with reservations, and huge lines of thirsty visitors formed outside.

Around six million visitors from around the world are expected at the festival in Munich, which ends on 6 October.

"O zapft is!" - which is traditionally shouted at the beginning of the festival - means "it is tapped!"