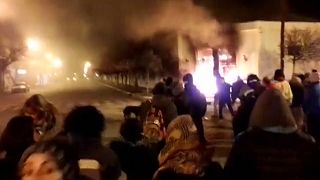 Angry demonstrators set fire to a local government building in the southern Argentine city of Rawson on Wednesday (September 18), following the deaths of two teachers who had been protesting for salary increases.

Protesters set fire to the entrance of the local government building. Earlier in the day, two teachers died in a traffic accident when they were returning from a demonstration on the issue of education standards and pay.

Anger was further fuelled by reports that Chubut Governor, Mariano Arcioni, announced he was planning to increase his own wages and that of his inner government circle.

According to local media, authorities have agreed to sit down with demonstrators for talks to resolve the deadlock