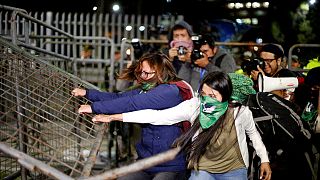 Clashes on the streets of Quito over pro-abortion law

There were scenes of anger on the streets of Quito on Tuesday (September 17) as pro-abortion protesters clashed with police after Ecuadorian lawmakers voted down a motion that would have eased abortion laws in rape cases.

Abortions are illegal in Ecuador, except under two circumstances: If the life of the pregnant woman is at risk or if the pregnancy is the result of the rape of a woman with mental disabilities.

In January, Ecuador's national assembly began to debate a bill on decriminalising abortion in cases of rape, incest and forced artificial insemination.

On Tuesday, the motion was shut down with just 65 lawmakers in favour, just short of five votes needed for it to pass and reflected the deep divisions in the country over the issue.

Ecuador's current abortion laws have been in place since 1938. The last time the country debated easing abortion laws in cases of rape was in 2013 when the assembly voted against it.

The reforms have been strongly opposed by the influential Roman Catholic Church and more conservative members of the assembly.

Many of their arguments focus on increasing penalties for rapists, instead of easing access to abortion.

But supporters of the abortion reforms have focused on Ecuador's twin epidemics of rapes of girls and underage pregnancies.

Women's rights groups argue that the outlawing of abortion affects working-class women the most. Poorer women are forced to seek out backstreet abortions which can lead to complications, infections and death.

Unsafe abortions accounted for 15.6% of all deaths in Ecuador in 2014, the fifth-biggest cause of mortality for women and the third-largest cause of maternal deaths, said the Ministry of Health in a study released in 2017.