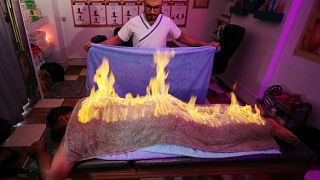 An Egyptian masseur plays with fire to relieve his clients' muscle pain at his spa in the Nile Delta governorate of Gharbeya.

Abdel Rehim Saeid, 35, applies the ancient Pharaonic technique, known as the "fiery towel" by starting with a standard massage, using oil and chamomile, to stimulate blood circulation and alleviate some of the pain in affected areas.

Then comes the heat. Saeid places several layers of towels and other isolating materials on the client's back.

Then a towel soaked in alcohol is placed on top and set on fire. It burns for roughly a minute before the flames are put out with a wet towel.

"It is ...called a fiery massage," Saeid said, that works by sucking moisture out of the body.

Saeid said he cannot use the technique with people suffering from high blood pressure, kidney failure or haemophilia.

He said he trained under an expert in the fiery towel technique in Morocco and had earned several massage certifications from institutions in Egypt.