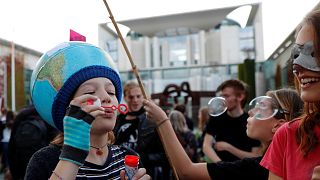 Fridays for Future calls for more action against climate change

Hundreds of protesters from the 'Fridays for Future' movement took to the streets of Frankfurt on Friday to protest against cars outside international motor show (IAA).

At the same time, protesters also gathered in Berlin and formed a human chain around the chancellery, demanding more action be taken against climate change.

Later in the afternoon, Chancellor Angela Merkel and members of the German coalition government were set to gather at the chancellery to discuss a package of climate protection measures.

The climate protection package is likely to include a pricing mechanism for carbon emissions and payouts for low-income families to cushion the effects of the new measures.