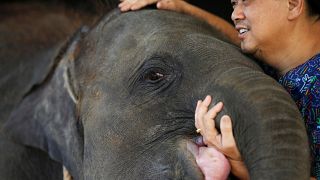 Thai elephant with prosthetic foot is transferred to new home

A three-year-old baby elephant with a prosthetic foot was transferred to a new home in northern Thailand on Thursday (September 12).

The elephant, called Fa Jam, was caught in a trap in 2016 and was later rescued and fitted with a prosthetic foot.

"I hope she will be happy with the new home. We are sad, but this is what we know from the beginning that it will happen," said Kampon Tansacha, managing director of Nong Nuch Tropical Garden where the elephant was being treated.

Fa Jam will be transported to the Thai Elephant Conservation Centre in Lampang province, a 16-hour drive in northern Thailand where she will live with other injured elephants.