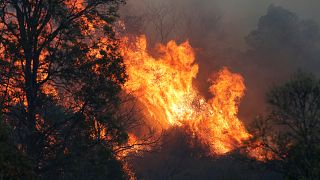 Firefighters battled strong winds and fast-moving blazes as they worked to contain out-of-control bushfires that have destroyed at least 21 homes across two states on the country's east coast.

In the north-eastern state of Queensland, Premier Annastacia Palaszczuk said 17 homes had been destroyed, with the risk posed by fires remaining high for several days despite temperatures cooling.

In New South Wales, Australia's most populous state, more than 65 bush and grass fires were burning on Saturday, with four properties lost in the town of Tenterfield, in the state's north.

The first week of the Australian spring hasn't historically been a period of high fire danger but the country's east coast has suffered through two years of below-average rainfall, creating drought conditions in wide parts of the country.