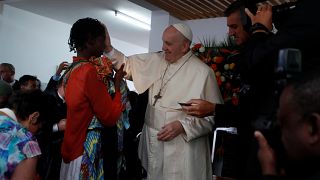 Pope Francis, ending his visit to Mozambique, said a Mass for some 60,000 people in Maputo's national stadium.

Francis urged an estimated 60,000 Mozambicans to continue on the path of post-civil war reconciliation. But he warned of the dangers of corruption and the injustices committed when public officials claim to help the poor but have personal interests at heart.

Pope Francis wrapped up his visit to Mozambique on Friday by consoling HIV-infected mothers and children and denouncing the rampant corruption that has helped make the southern African nation one of the world's poorest countries.

Francis received a raucous welcome at both a medical centre specializing in AIDS treatment and a rain-soaked sports stadium full of singing and dancing faithful, evidence of his popularity in a country where Catholics represent less than a third of the population.

He will now head to Madagascar before visiting Mauritius.