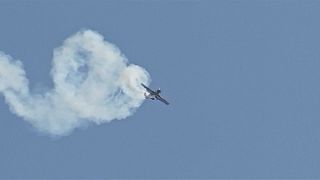 The World Aerobatic Championships provided entertainment in the skies over Chateauroux, France, as home pilot Louis Vanel won the men's event with a wonderful display of stunts.

The 30th edition of the championships drew big crowds to the French town, and they were rewarded with some precise mid-air manoeuvers in the clear blue skies.

Vanel did enough to claim the men's gold medal, edging out compatriot Alexandre Orlowski with Russian pilot and defending champion Mikhail Mamistov having to settle for third.

The Aerobatic Championships feature the same principles of figure skating with pilots marked on finesse and precise manoeuvers rather than hair-raising stunts.

The women's edition was won by France's Aude Lemorant, while Robert Holland of the USA took the freestyle honours.