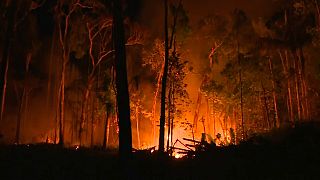 Amazon wildfires spread, with 72,843 detected so far this year

Fires continue to consume swathes of the normally lush Amazon, killing animals and leading to respiratory illnesses according to the leader of an indigenous group in Brazil's Rondonia state.

Bolsonaro's stance has come under intense scrutiny as images of the burning Amazon have sparked international concern about the consequences for global warming.

Through July, destruction of Brazil's rainforest is up 67% compared to the same period a year ago, according to preliminary data released by the country's National Institute for Space Research (INPE). Nearly 80,000 fires have been recorded this year through Aug. 24, the highest level since at least 2013, INPE says.