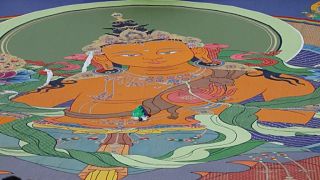 Unveiling of giant Buddha Thangka kicks off festival in Tibet

To celebrate the annual traditional Sho Dun Festival, the unveiling of a giant Buddha was held at the Drepung Monastery in Lhasa, southwest China's Tibet Autonomous Region, attracting tens of thousands of people.

The seven-day Sho Dun Festival, with a history of nearly 1,000 years, is one of the grandest traditional festivals for the Tibetan people, following the New Year festival of the Tibetan calendar.

Amid the sounds of solemn trumpets, a huge Thang-ga painting of Jamba Buddha, about 42 meters long and 40 meters wide, was slowly unfurled.

The Sho Dun Festival means the festival of eating yoghurt in the Tibetan language. So it's also called the Yoghurt Festival.

The Sho Dun Festival was included in the first national intangible cultural heritage list. This year, in addition to the display of the Buddha, there are some other activities including Tibetan opera, traditional equestrian, Tibet chess, and Tibetan costumes.