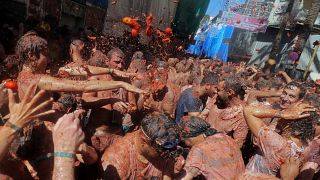 Here are some of our best no comment videos from this week:

Tuning in for a whistling contest

The world's best whistlers descended on the Los Angeles suburb of Pasadena for a special contest.

They were taking part in the Masters of Musical Whistling International Festival and Competition.

"Here we have over 60 whistlers from 11 countries, from all over the world," said competition organiser Carole Anne Kaufman, a former world champion whistler.

"We are talking from Japan, from Spain, from Italy, we have people coming from all over. It is very exciting to see just so many people that are coming together to be a part of the community.

"What makes a good whistler is the same thing that makes an excellent instrumentalist. So, we are looking for the people that sound beautiful, they are in tune, they know how to perform, to connect with the audience.

Children splashed inside a mobile pool in the El Infernal neighbourhood in the province of Pinar del Rio, part of Cuba's renowned tobacco-growing zone.

The makeshift pool made from a cart hitched by a tractor is among the latest attraction for children seeking a reprieve from the harsh Caribbean heat.

In a neighbourhood far from recreation centres, community members helped to make the idea of the tractor pool a reality, lending tarps, providing water and paying for the tractor's gasoline.

"We dream that our children do not move to another community, but that they become the new farmers of the future. That is why we provide this," said Ipolito Marraron, the president of the cooperative that lent the tractor, with the condition that it could only be used if it wasn't needed by the agricultural workers.