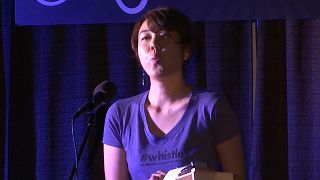 Whistling competition: Japanese blows the audience away in Pasadena

The Masters of Musical Whistling International Festival and Competition, which took place in the Los Angeles suburb of Pasadena last weekend, brings together whistlers from all over the world, all battling it out to be crowned the next world champion.

"Here we have over 60 whistlers from 11 countries, from all over the world. We are talking from Japan, from Spain, from Italy, we have people coming from all over. It is very exciting to see just so many people that are coming together to be a part of the community," said Carole Anne Kaufman, a former world champion whistler and the founder and organiser of the Masters of Musical Whistling Festival and Competition.

"What makes a good whistler is the same thing that makes an excellent instrumentalist. So, we are looking for the people that sound beautiful, they are in tune, they know how to perform, to connect with the audience. Whatever you would expect from your favourite opera star, whatever you would expect from a professional saxophone player who can do something that moves you, that is how we are judging you, that's what makes a world champion," she added.

The next stop on the international whistling circuit will see whistlers competing in Japan at the World Whistlers Convention (WCC) in April 2020 where the next world champion will be crowned.