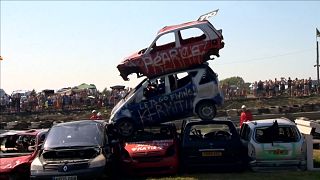 Flying cars might still be the stuff of science fiction, but competitors in the UK's 2019 Car Jumping Summer Championships did their best to defy gravity on Monday (August 26).

Undeterred by flips and fires, drivers accelerated their cars over a ramp in an attempt to fly over a line of assembled old bangers and land safely on the opposite side.

Although no major injuries were reported, paramedics were in attendance to tend to drivers, who risk skeletal and soft tissue damage, as well as whiplash.

Revving up in his black Ford Fiesta, Bradley Lock was crowned champion of the 2019 edition of the annual contest, convincing the judges and a large Bank Holiday crowd that his jump's combination of flight, flair and distance was the winner.