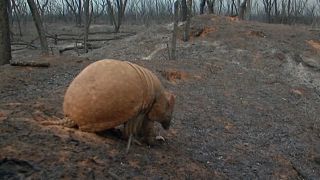 A nearly blind, little armadillo scurries through the charred remains of its forest home before being scooped up by local veterinarian, Jerjes Suarez.

Suarez says that the heat and smoke from the fires are responsible for the deaths of many animals and those that didn't die in the flames are in dire conditions due to the lack of water and food in the wake of the inferno.

Many blazes burn unabated across vast swaths of hilly tropical forest and savanna near Bolivia's border with Paraguay and Brazil. At least 1 million hectares, or approximately 3,80 square miles, have been impacted by the fires, officials said.

Bolivian President Evo Morales said on Sunday (August 25) he was open to international aid to fight the blazes that have engulfed rural villages and doubled in size since Thursday (August 22).

Morales' government had been slow to accept the aid, initially saying it would use its own resources to fight the fires, but pleas from villagers and officials of Santa Cruz province led to an about-face. Argentina, Paraguay, Peru, Chile and Spain have all offered support.

Bolivia late last week contracted a Boeing 747 "Supertanker" from the United States to help with the fire-fighting and has mobilised more than 2,000 firefighters, as well as small aircraft and helicopters. But the area affected by wildfire has nonetheless nearly doubled since Thursday.

Thousands of wildfires are also decimating the neighbouring Brazilian Amazon, the world's largest rainforest. The blazes have nearly doubled this year compared with the same period in 2018, prompting global outrage.