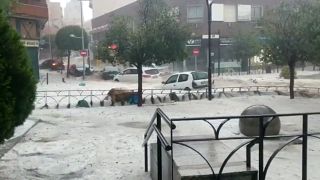 Flash flooding caused by heavy hail storms swept through Madrid on Monday (August 26), transforming roads into rivers and bringing the city to a standstill.

In the town of Arganda del Rey, near the capital, eyewitness footage captured cars and rubbish bins being swept away by the rushing flood waters.

The State Meteorological Agency also confirmed that further rain was expected before the end of summer.