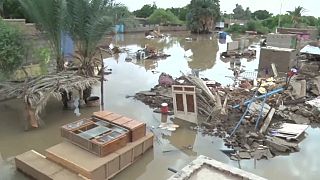 Dozens dead after Sudan hit by weeks of heavy rain

Thousands of families in Sudan have been affected by flooding caused by two months of heavy rain, with many forced into temporary accommodation.

A Sudanese health official said on Sunday that at least 62 people had been killed and around 100 others injured as a consequence of the flooding.

The worst impacted areas were White Nile, Sennar, El Fasher, as well as the Wad Ramli and Wad El Mahi areas in the north of Khartoum.

Water cut off roads and swept away structures and objects, particularly in the southern outskirts of the capital of Khartoum, where the White and Blue Nile rivers meet.

Military troops were deployed to help.