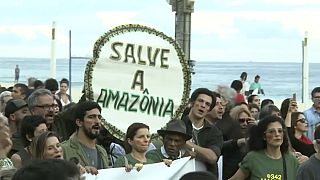 Sunday's demonstration was part of anti-government protests that were taking place in a number of cities across the country.

Young children also participated in the street demonstration, holding banners with messages asking for protection of the planet and the Amazon.

Some of the messages of the posters were directed at Brazilian President Jair Bolsonaro, with one reading "Bol$onaro is burning our future."

Fires are common in Brazil in the annual dry season, but they are much more widespread this year.

Brazilian state experts reported nearly 77,000 wildfires across the country so far this year, up 85% over the same period in 2018.

Bolsonaro tried to temper global concern, saying that previously deforested areas had burned and that intact rainforest was spared.

On Friday, he announced that his government would send 44,000 soldiers to help battle the fires that are scattered across his nation's share of the vast Amazon, an overall region 10 times the size of Texas that is seen as a global bulwark against climate change.

Only a few hundred troops had been sent so far.