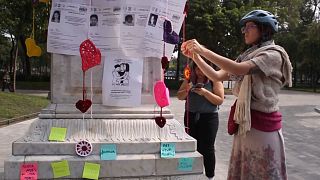 Mexican women knit hearts to honour the memory of those murdered

A group of women constructed a memorial made of hand-knitted hearts in Mexico City's Alameda park to honour the memory of murdered women.

People had been protesting over mishandled investigations into the alleged rapes of teenagers by local police.

Many people have demanded action to combat violence against women in Mexico.

A 2018 government survey found that four out of five women in the country don't feel safe.

The United Nations says two out of five women in Mexico will experience sexual violence, such as unwanted groping or rape, during their lifetimes and that nine women are murdered every day in the country.