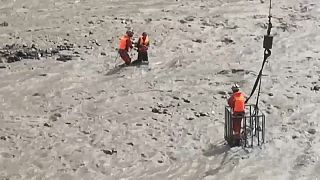 In Leshan City, heavy rain caused mountain torrents in a village, trapping an elderly man in the middle of a river channel.

Rescuers threw a rope and a life jacket to the man while two firefighters were lifted in a crane suspended man-basket towards him to bring him to safety.

Due to continuous heavy rainfall, many roads in the county were disrupted, and large machinery could not reach the site in time. Firefighters cooperated with local police officers to send life jackets to the villagers and take them back to safety with ropes.

From Monday to Thursday, Baoxing County has seen the heaviest continuous rainfall in 12 years, resulting in over 200 geological disasters as of 22:00 Wednesday, affecting around 30,000 people, trapping around 2,000 tourists and forcing the relocation of around 12,000 people.