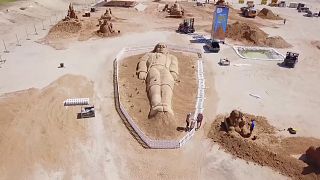 The International Sand Sculpture Festival has opened in Ashkelon, Israel to an excited public in spite of recent unrest in the region.

2,000 tonnes of specialist sand has been brought in to create an array of giant sculptures of characters from famous children's fairytales

Organisers of the event see it as an important symbol of Israeli defiance against alleged aggression from the Gaza strip.

The festival has involved 10 artists from around the world.

Many of the characters featured are instantly recognisable from children's literature, from Cinderella to Snow White.

Israeli authorities say that their Iron Dome missile defense system intercepted rockets fired just hours before the festival was due to open to the public.