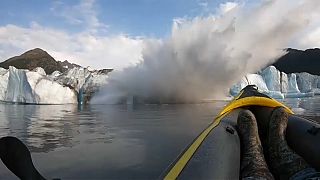 Two kayakers, Andrew Hooper and Josh Bastyr, had a lucky escape when a glacier collapsed at Spencer Glacier in Alaska on August 10.

Dramatic video captured the moment of a series of ice structures collapsing, creating a huge wave that sent the two fleeing.

"I got hit with a couple pieces of ice," said Hooper. "I've got a knot on my hand. I had my ribs hit with a piece of ice. I'm completely soaked. Josh is soaked. After the first hit we were able to see the iceberg again and it went under, you know, from falling. And it created a good 8-12 foot wave that was headed straight for us. So we both turned the boats around and paddled as quick as we could to try to ride the wave out and luckily everything turned out ok, so no regrets."