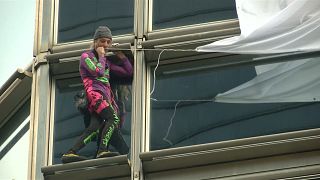 A Frenchman known for carrying out several unauthorised climbs of skyscrapers around the globe has scaled a 62-storey building in Hong Kong.

Alain Robert's stunt was part of a move to appeal for peace after 10 weeks of anti-government protests over a proposed extradition bill.

The 57-year-old, dubbed "the French Spider-Man", scaled the Cheung Kong Centre and unveiled a banner, which featured both the Chinese and Hong Kong flags.

The sign positioned China's flag in the left-hand corner with Hong Kong's flag on the right side. Underneath was a yellow hand shaking a red hand on a white background to signify peace.

Following his climb, Robert underwent a medical check and was taken to a police station.

It wasn't immediately clear if he would be charged for the ascent.

In 2017, Robert was banned from returning to Hong Kong for one year after he had climbed another building.