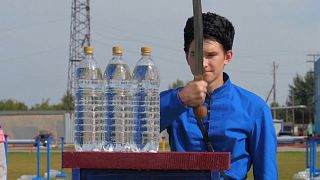 Here in the town of Bogdanovich, Cossacks and Cossack fans are gathered to witness who will be champion of the long-blade weapons.

Contestants compete by chopping and slicing their way through different targets.

The games are based on Cossack traditions although they now use more modern targets such as plastic bottles filled with water.

Six thousand bottles were cut during the tournament.

The rules of the competitions were developed just five years ago and envisaged using plastic bottles as more accessible and cheaper targets than traditional ones.

It can be either cutting right in front of you, or with a turn, either one bottle, or several at once, and while you need to do this right, you also need to do it as quickly as possible as contestants are also being timed.

The Cossacks battle Federation has been aspiring to register the competition as a sport with the Russian Ministry of Sports and will continue its efforts this year.