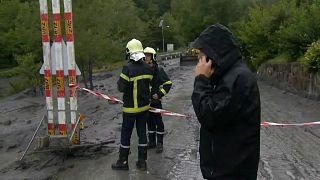 Two people are still missing in Chamoson, Switzerland after two cars were carried away by a mudslide.

A violent storm had caused extensive damage in the area.

The municipal and cantonal police, the rescue services, and many firemen were mobilised.

Authorities also brought in a helicopter to support the search. Roughly 70 people were working on the search for a 37-year-old man and 6-year-old girl, the police for the canton of Valais said.

A spokesperson for the police department confirmed to Euronews that one of the two cars that were swept away had been found. He said it was difficult to say whether or not they would be able to find the missing people.

A similar episode had occurred almost a year ago to the day in the same place.